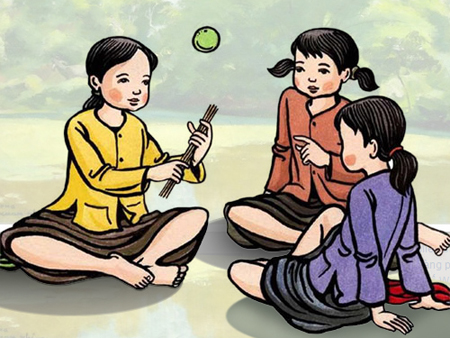 (Hanoitourist) - This girls' game (chơi chuyen) includes ten thin, well-sharpened, round bamboo sticks and a ball, which traditionally is a fig, a miniature variety of eggplant, a small rock or a clod of clay.

This girls' game (chơi chuyen) includes ten thin, well-sharpened, round bamboo sticks and a ball, which traditionally is a fig, a miniature variety of eggplant, a small rock or a clod of clay.

These days, tennis balls are becoming more popular as a substitute. The player tosses the ball into the air. While the ball is in the air, she must quickly pick up the sticks and then catch the ball. 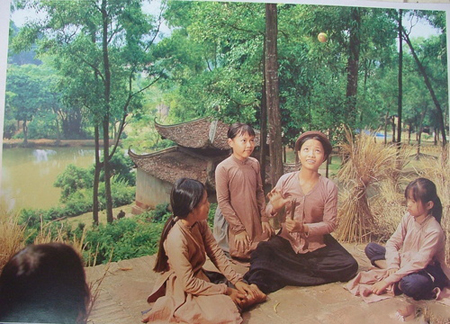 In the first round, the player picks up the slicks one by one. Next, she gathers two sticks at a time, and so forth up to ten. In these stages she plays with only one hand. The girl picks up sticks and catches the ball while reciting the rhyme. Meanwhile, her face reddens and her eyes become intense as she performs in front of her friends.

The peak of the game is the last, most animated stage with all ten sticks in a bundle. During this stage, the player losses the ball and then transfers (chuyen) the pack of sticks from one hand to the other. She must successively switch the bundle, first once, then twice, then three or even more times before catching the ball.

The hands of a girl playing chuyen open and close like small, nimble butterflies. If a player's hands are not swift or if her eyes are not sharp, or if she fails to coordinate the two, she will lose her turn. The game will pass to the next girl. Playing chuyen warms up the body and creates a lot of fun. During summer or autumn, small girls play it everywhere, from the shade of a village banyan tree to a deserted market stall./.