Share:
(Hanoitourist) - The Foreign Ministry and the Viet Nam Women’s Union on August 3 jointly held an exchange programme and exhibition themed: “ASEAN - Colours of Culture”, to mark the 49th anniversary of ASEAN (August 8, 1967-2016). 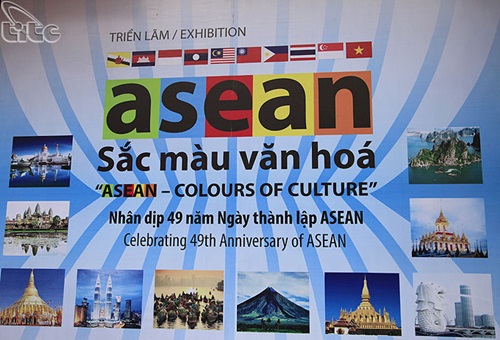 Attending the event were Ambassador Nguyen Nguyet Nga, Honoury President of the ASEAN Women’s Circle in Ha Noi, Bui Thi Hoa, Vice President of the Viet Nam Women’s Union and wives of the ASEAN countries’ ambassadors, as well as representatives from international organisations in Ha Noi. Opening the exhibition, Ambassador Nga highlighted the significance of the event that celebrates an important anniversary of ASEAN - a successful model of regional connectivity, solidarity, dynamism and self-reliance. The confidence in the strength of the spirit of solidarity and the “unity in diversity” is key for the connections between nations in Southeast Asia under the common roof of ASEAN, she said, adding that similarities in history, tradition and culture have brought ASEAN nations closer together. She held that the diversity and uniqueness of the cultures have made an attractive identity for the ASEAN Community and bring the association to flourish beyond the region.

The exhibition, which introduce the nations, people and cultures of the 10 ASEAN members, is expected to provide visitors with a vivid picture of the diverse cultural colours of the Southeast Asian nations, she added. Meanwhile, Vice President of the Viet Nam Women’s Union asserted that the activity will help women in ASEAN member countries to become closer, thus boosting their links, friendship and mutual understanding, while promoting the role of women’s organisations in the community in each country and the ASEAN Community. Vadsana Phomvihane, Vice President of the ASEAN Women’s Circle in Ha Noi, lauded the coordination of ministries and sectors of Viet Nam in holding the event which helps women in ASEAN foster their friendship. During the event, ASEAN member countries displayed their country’s typical handicraft products, including those made by women.